I started this original post over a month ago but as you will read, we have been facing some unorthodox things here as of late and it has taken me until now to even consider getting back to blogging about things. It is never so hard to write about things as it is your failures, fears, struggles and let downs. Writing them down is not only admitting them but it cements them into existence in a way. I began to write about Spiritual Warfare and how it can take many forms and I felt convicted to begin sharing more about ministry and the spiritual things here on our homestead blog, when even more terrible things happened; the major one being an assassination of a local man and a night of terror for us. I will leave the unfinished original segment alone and pick up at the end of what I originally started to say with an overview of the struggles we have had since then. Forgive the lack of flow on this post.

“We started over with chickens but now our coop sits empty yet again. Does Spiritual Warfare really look like this? 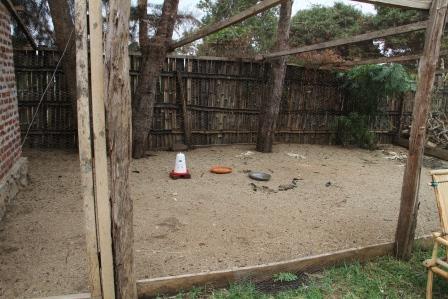 There are many people who believe many different things about Spiritual Warfare and how it manifests in people’s lives. Some people never talk about Spiritual Warfare or are never taught about it, while others see a demon behind every negative thing that happens in life. I do not pretend to be an authority on Spiritual Warfare, in fact, I feel more that I wasn’t educated enough about it in my years leading up to moving to Congo but I certainly don’t blame it for every little thing.

From my limited experiences in life thus far, I have never experienced Spiritual Warfare to fit into someone’s box. If you were the Enemy would you use only one method of approach easily lined-out and identified, or would you personalize your attack to the individual, timing it just right and aiming it at their weak points? If you’d choose that latter, than why not accept, even in your own life, that it can manifest in very different ways? This last week has been just such a time in my life here in Congo, thus far, that the Enemy timed his personal attack perfectly and hit me where it hurt; our empty coop stands as evidence. 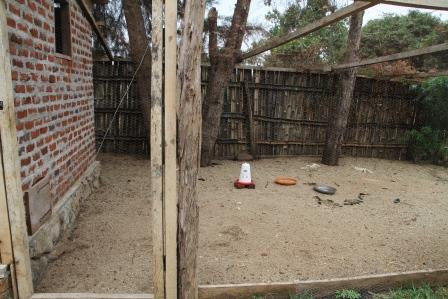 I have long wanted to be here and set up our homestead here. Gardening and raising animals along with our family were some of the main activities that I planned to do. But I also have desired to have a personal ministry in the areas of community development, specifically with animals. I want to raise animals to hand out “starter-packages” as a micro-loan to help families become self-sufficient. I have been working toward this goal since arriving here in Congo and just last week, things were finally starting to come together. The pieces of the puzzle were starting to fit together.

In November we flew in a large batch of some special chicks called Kuroilers from what I thought was a reliable source in Uganda to begin this venture. But over the course of several months they were wiped out by a disease that came in with them and then an ant attack. Read about that if you like here. So we were left with starting over. We culled our entire flock, minus the turkeys because they showed no signs of sickness, and sanitized everything. We then waited the stated three weeks before adding more chickens.

Then over the course of about two months be began purchasing chickens at the markets again. This last weekend we sent a local man with some money to go and purchase more chickens for us (for some reason it seems the locals don’t like to sell to us outsiders. No, we don’t know why). He brought back 7 healthy-looking birds. One died, then two died mysteriously. I thought they had had eggs broken inside of them from a hard motorcycle ride from the market but then the third one died and finally the other chickens started showing symptoms; symptoms of the exact same disease as before.

I feel embarrassed to write this post about this honestly because I don’t consider myself an irresponsible chicken keeper. I have never struggled so much with keeping them as I have in our few months here – never. I’ve had chickens for the majority of my life, just over 15 years now, and nothing like this with the repeated troubles has ever come my way. Not that I haven’t ever had problems, it’s just that I’ve never had so many that wiped it all out, until now.

If I had no plans for ministry it’s quite possible I would have kept the survivors from the original disease for myself but they would be carriers for life. Giving anyone birds would be absolutely out of the question. This second wave of sickness came literally on the eve of moving forward with ministry plans – purchasing incubators and writing up a post about our new start and beginning steps with my ministry. Now I’m left to write about the empty coop left behind and more importantly about the Spiritual Warfare I and even the team are experiencing.”

So after writing this, before I could even finish the post and get it published, some events happened that prevented me from doing so; mainly an evening when an assassination took place. I have yet to discuss the events of that night publicly and I’m not sure I ever will other than this mention here and now but here is the nutshell of what happened. Some robbers came to the main store in town at night and assassinated the store owner and then robbed him. Panic happened in the community and as a result there was much shooting into the air that happened. This sounds like no big deal when simply stated but when you are living in a place with no infrastructure and where so much rebel activity and literal massacres have happened- shooting close by is extremely serious and scary. Without a lot of details, we spent a good chunk of the evening in our safe room listening to shooting and screaming happening. It was traumatizing. We didn’t even know what really had happened until days after.

Anyone who has ever experienced anything close to that type of trauma can understand PTSD. Let’s just say, I’m still not over it. It has changed my life. There was a lot of hard things in the aftermath of that terrible night like people we know fleeing from the area with their families (yes literally fleeing). The struggles with feeling safe and seeing a purpose in being here after were a battle.

It was after a couple weeks though that we had the opportunity to attend a New Testament Dedication for the Logo language which was a healing and revealing event for me. It reminded me why are here, why we are staying and that despite the ugly parts of living here there is much joy and beauty also. 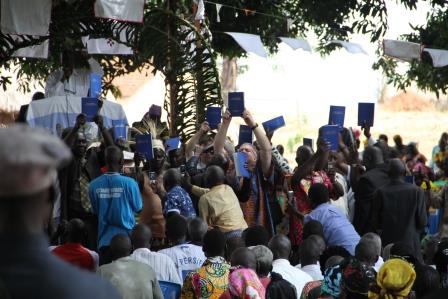 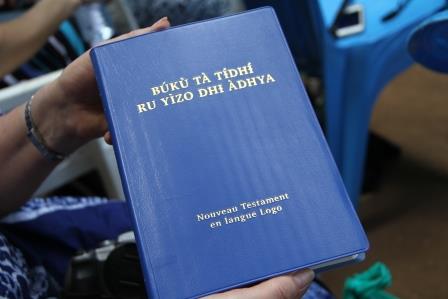 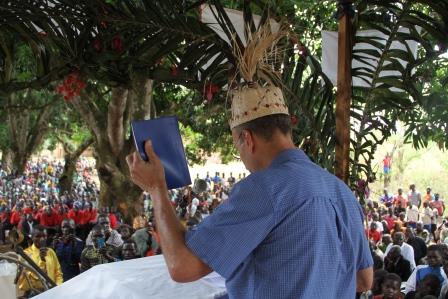 There have been some ups and downs in the weeks since then. I have had several meetings with the two men from the hospital’s malnutrition program who are helping families become self-sufficient. We are going to start an animal micro-loan program in a few months. God brought that together and I will do another post on that later (now that I’m back at it I think). I was able to share some orange-fleshed sweet potatoes with them and also get them information about the moringa tree in the meantime while we wait to begin our animal program. Those were some of  the ups.

Another down that happened was our turkeys have finally shown that they have sickness and we have had one die from it and another older turkey broke it’s leg flying off of the roost. They now also have to go but there is a light at the end of the tunnel. A couple turkeys contributed to a clutch of eggs that were sat on by one of the females. We took the eggs away a day before they were to hatch to prevent exposure to the disease and now have five healthy turkey polts to begin to start over with. It is also a possibility to have more flown in at a later time but that is always a gamble because you don’t know what you get till they arrive. Quarantine time will be necessary.

So now it’s time to start over and to move on from the hard events over the last couple of months and get a fresh start on life. We have one month here before we leave for some vacation time and it will be after that that a new start is going to happen; my ministry will begin, we will restock using many precautions, and we can try again on a lot of things. New beginnings and a fresh start are on the way, despite the months of much Spiritual Warfare.